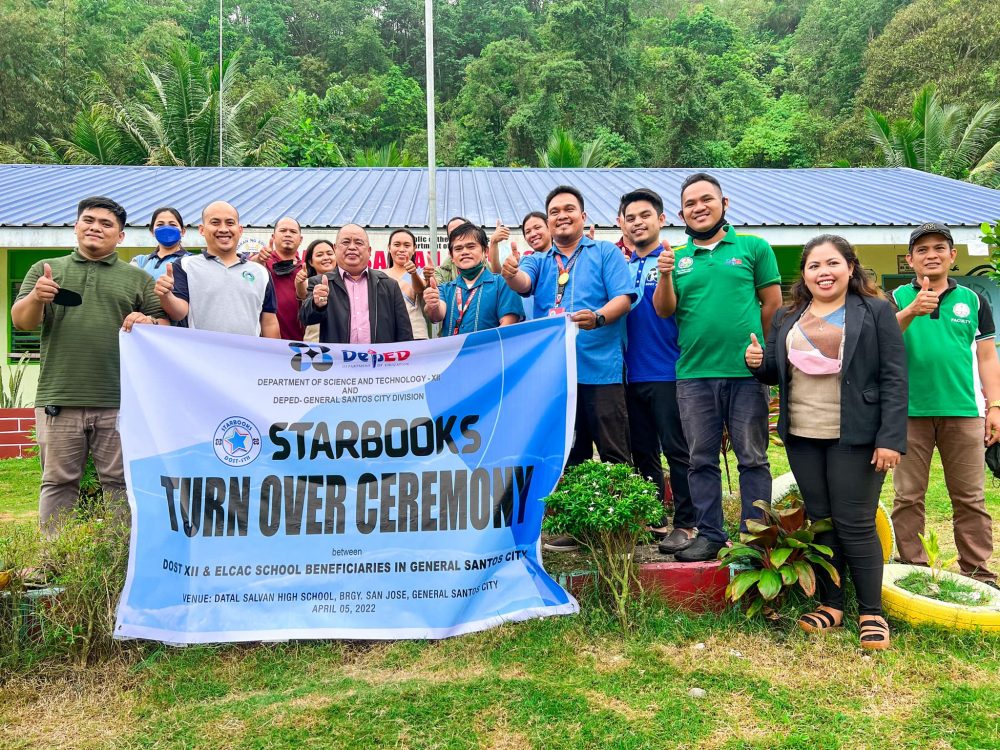 Heavy rainfall, long rough roads, and a topsy-turvy travel while observing fasting never slowed down the DOST 12 Regional Director Sammy P. Malawan, CESE together with OIC-Provincial Director For. Nabil A. Hadji Yassin in giving 𝗦𝗖𝗜𝗘𝗡𝗖𝗘 𝗔𝗡𝗗 𝗧𝗘𝗖𝗛𝗡𝗢𝗟𝗢𝗚𝗬 𝗔𝗖𝗔𝗗𝗘𝗠𝗜𝗖 𝗔𝗡𝗗 𝗥𝗘𝗦𝗘𝗔𝗥𝗖𝗛-𝗕𝗔𝗦𝗘𝗗 𝗢𝗣𝗘𝗡𝗬-𝗢𝗣𝗘𝗥𝗔𝗧𝗘𝗗 𝗞𝗜𝗢𝗞𝗦 (𝗦𝗧𝗔𝗥𝗕𝗢𝗢𝗞𝗦) computer units personally to Bl’aan residents in Purok Datal Salvan, a community in Brgy. San Jose, General Santos City under 𝗡𝗮𝘁𝗶𝗼𝗻𝗮𝗹 𝗧𝗮𝘀𝗸 𝗙𝗼𝗿𝗰𝗲-𝗘𝗻𝗱 𝗟𝗼𝗰𝗮𝗹 𝗖𝗼𝗺𝗺𝘂𝗻𝗶𝘀𝘁 𝗔𝗿𝗺𝗲𝗱 𝗖𝗼𝗻𝗳𝗹𝗶𝗰𝘁 (𝗡𝗧𝗙-𝗘𝗟𝗖𝗔𝗖) areas.
San Jose is a barangay located in the outskirts of the city of General Santos. Comprised with approximately 14,000 residents, most of the settlers belong in Bl’aan tribe. Although existing for many years now, some of the areas in the barangay are not yet blessed with good internet connection and enough gadgets for students. Added with the simple back-country lifestyle and an apparent inexperience to latest technologies, students find it hard to be engaged in “cyber-learning”, a new trend in our country’s education. Students would go to the barrio’s central town to connect to “piso-wifi” or to poor-to-moderate cellular data to gain access to learning resources, which is a chore for them since the sittios are several kilometers apart from each other and transportation is difficult.
Knowing these, even though it was way past his official hours of duty courtesy to their celebration of Ramadhan, RD Engr. Malawan did not hesitate to visit the humble town of Datal Salvan, one of the Geographically Isolated and Disadvantaged Areas (GIDA). In his mind, a 30-minute exhilarating travel is nothing compared to what would be the impact of STARBOOKS in the community – an improvement to daily classes of the students and teachers, an advancement towards technology-driven education.
The DOST’s prime mover led his team from PSTO-SarGen to introduce the all-in-one “𝙇𝙞𝙗𝙧𝙖𝙧𝙮-𝙞𝙣-𝙖-𝙗𝙤𝙭” to the teachers, students and parents during the 𝙏𝙪𝙧𝙣-𝙤𝙫𝙚𝙧 𝘾𝙚𝙧𝙚𝙢𝙤𝙣𝙮 held at Datal Salvan High School, Purok Datal Salvan, Brgy. San Jose, GSC with the Teacher-in-Charge Michael A. Adam, HT III and Ronald T. Visaya, Principal I in Datu B. Balunto National High School, an adjacent school and also a recipient of the program.
“Maayo gyud kaayu nga naay STARBOOKS diri, kay makatabang kini sa inyung mga estudyante na maka research na dili na magkinahanglan ug internet connection”, the brilliant director quoted in vernacular as he told the attendees that the technology doesn’t require internet connection in doing research and accessing learning materials. He also added that “not only for education, but STARBOOKS is also a good source for livelihood ideas and tutorials through audio-visual presentations”, he told the parents.
On behalf of the Bl’aan parents and students, Mr. Adam and Mr. Visaya extended their thanks to RD Malawan during the event. The two reassured the DOST 12 that STARBOOKS will be used to its maximum utilization, with their schools as the venue for usage and access. The locals were overjoyed as the event closed, evidenced by their smiles and laughter as they took group photos culminating their open-armed reception of the DOST’s flagship program.
When asked what would be the best description to what rose to the forefront of RD Malawan and DOST 12 that day, the B’laan parents said “𝙆𝙖𝙠𝙖𝙮ê 𝙙𝙞 𝙣𝙞𝙢ô” – a B’laan term for 𝘭𝘰𝘷𝘦 𝘧𝘰𝘳 𝘸𝘰𝘳𝘬. “Never in our minds that the DOST would think of Datal Salvan and other sittio of Brgy. San Jose as one of their recipients. Thank you so much DOST” non-verbatim, said one of the parents who witnessed the turn-over knowing that her sons and daughters will greatly benefit in this new technology.
Community empowerment at its finest. Indeed “𝙆𝙖𝙠𝙖𝙮ê 𝙙𝙞 𝙣𝙞𝙢ô” was shown by RD Malawan and DOST 12 in bringing Science, Technology, and Innovation to the community. It is the singular goal of the agency to continue the “kafakgis” or effort to implement programs even to the farthest places in Region 12.
#ScienceForThePeople #DOSTSarGen #dostPH
#STARBOOKS
Source: https://www.facebook.com/permalink.php?story_fbid=311366744462568&id=100067677332511