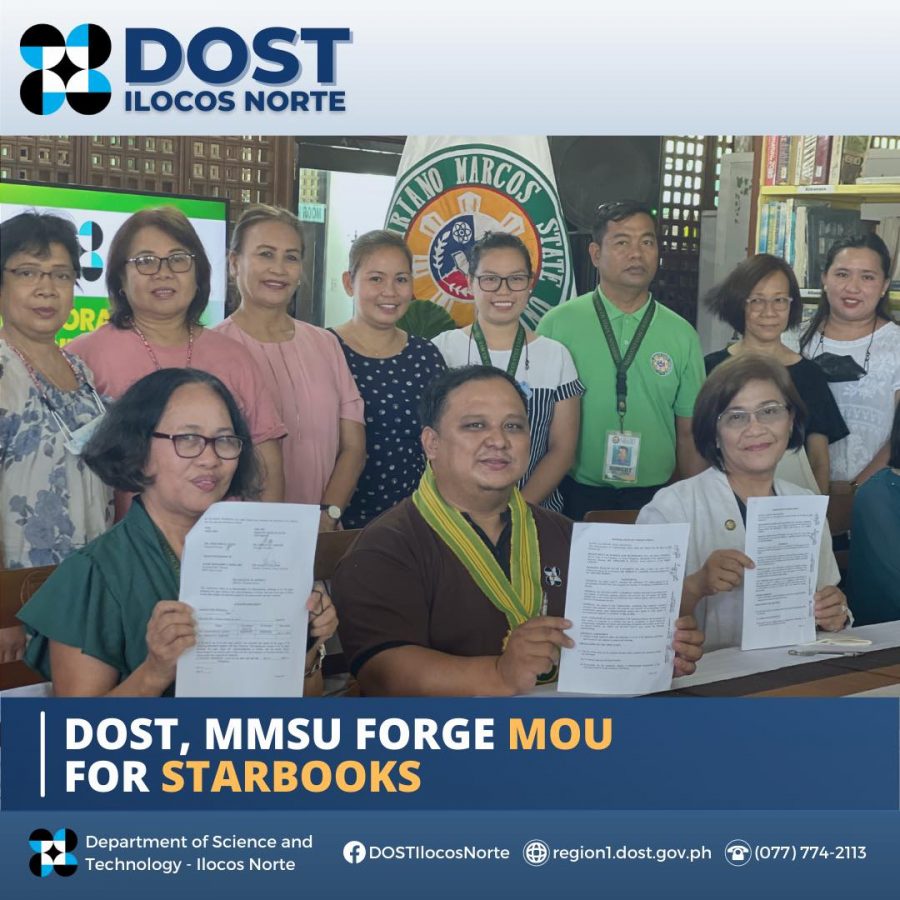 Batac City, Ilocos Norte—In its mandate of bringing science and technology closer to people, the Department of Science and Technology in Region 1 (DOST 1) through its Provincial Science and Technology Center- Ilocos Norte (PSTC-IN) launched Science and Technology Academic and Researched-Based Openly Operated Kiosk (STARBOOKS) at the Mariano Marcos State University (MMSU) on March 13, 2022.
Students and researchers of the MMSU – University Library System may now access the latest and most relevant science and technology (S&T) information for free, even in the absence of an internet connection, via a stand-alone onsite research kiosk developed by the DOST-Science and Technology Information Institute (STII).
Students, members of the academe, and teaching and non-teaching staff witnessed the signing of the Memorandum of Understanding (MOU) between the Mariano Marcos State University and DOST-PSTC Ilocos Norte to signal STARBOOKS’ debut appearance in the university at the University Library.
The MOU was signed by MMSU President Dr. Shirley C. Agrupis and Mr. Gerald O. Gabriel of DOST-PSTC Ilocos Norte representing DOST 1 Regional Director Dr. Armando Q. Ganal and DOST-PSTC Ilocos Norte Director Engr. Benjamin S. Mercado, Jr.
Called the Science and Technology Academic and Research-Based Openly Operated Kiosk Station or STARBOOKS, the first-of-its-kind research tool in the country contains a huge collection of digitized S&T resources in both text and video/audio formats on a wide range of topics. These include food and nutrition, health and medicine, emerging technologies, energy, environment, appropriate livelihood technologies, investigatory projects, and theses in different fields.
In her message, President Agrupis said, “With the STARBOOKS developed by DOST-STII we can now better disseminate science and technology information and training. While it has been called library-in-a-box I hope it will inspire everyone to think outside the box, to be creative, to be innovative, and to be decisive in pushing education and enlightenment .”
The STARBOOKS were acquired by the Mariano Marcos State University to become its university-wide beneficiaries in the province. “DOST is not slowing down nor resting on its laurels. It has set its eyes on a grand vision with plans that are already in store for the public. In the age of Artificial Intelligence and autonomous technologies, the public is assured that STARBOOKS will continue to outdo and reinvent itself and remain relevant for the next 10, 20 years or more” said Engr. Mercado as he ended his speech.
To orient its beneficiary institutions on the proper use and operation of STARBOOKS, DOST Region 1 coordinator Ms. Mary Ann Belen conducted an online seminar and workshop today May 16.
#STInRegion1 #ScienceForThePeople #sciencenation #IlocosNortePh #ScienceINthenorth
Kent J. Ramil
Source: https://www.facebook.com/DOSTIlocosNorte/posts/378895127618295