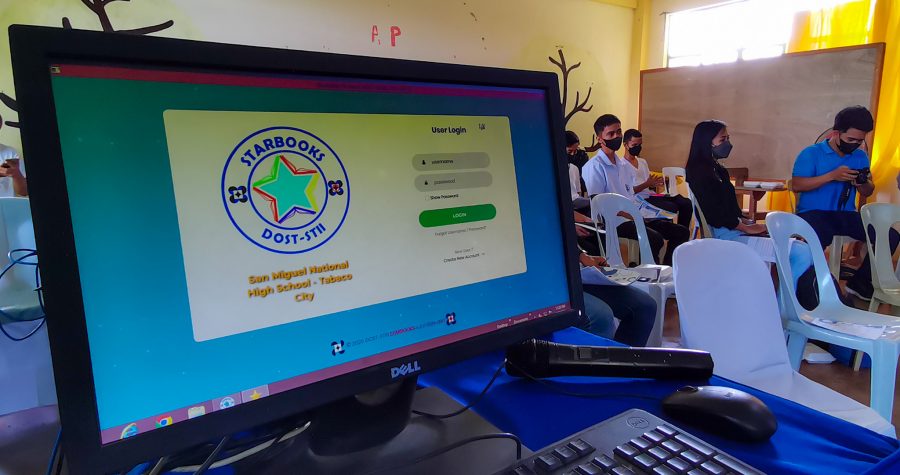 The First Philippine Science and Technology Digital Library, DOST-STARBOOKs was handed out to San Miguel National High School yesterday, July 5, 2022 through STARBOOKS: Orientation and Users Hands-on Training, MoU Signing, Turnover Ceremony Cum Project Launching.
The Science and Technology Academic and Research-Based Openly-Operated Kiosk Station (STARBOOKS) is a stand-alone information source for persons with little or no access to science and technology information resources. Mr. John Darnell B. Balbastro, a science teacher in SMNHS, initiated the project through “Project STARBOOKS: SMNHS’s Library in a Box”.
Through the approval of SMNHS Principal, Mrs. Shirley V. Bataller and the support of Tabaco East District 3 Public Schools District Supervisor, Dr. Agnes B. Bonaobra, the Project Launching was held at the JHS Building 1 of the school.
Among the participants of the event were the student representatives headed by Jhun Carl C. Belenzo, SMNHS SSG President, together with Hon. Saeed Ahmed Tango, barangay captain of Rawis, Hon. Carlito Boral of Sagurong and Kgwd. Hilario Borres of Visita. Ms. Mailyn Bio, Science Coordinator of Malictay High School as well as all the science teachers of SMNHS were also present during the event.
Project STARBOOKS consisted of an Orientation and Users Hands-on Training which was facilitated by Mr. Anthony Andes, Project Technical Assistant III from DOST V. The participants after the orientation and training in using and operating STARBOOKS also witnessed the Signing of Memorandum of Understanding (MoU) between DOST and SMNHS.
“STARBOOKS is one way of elevating the scientific and technology literacy among SMNHS learners. Through the wide variety of digitized science and technology resources in various formats such as text, video and audio as well as references and K-12 materials in other subjects, we can intensify the curiosity among our young learners. This can also address the unavailability and inaccessibility of learning resources in San Miguel since STARBOOKS can be used offline,” said by Sir John Darnell Balbastro.
During the closing Program, Dr. Agnes B. Bonaobra, PSDS of Tabaco East District 3, challenged the Proponent as well as the lead stakeholders to unite and help STARBOOKS become a sustainable learning resources in the island as well as use it especially now that information access is limited among the learners of the island.
The proponent as well as the Barangay Captains then agreed to accept the challenge and vocally expressed their support towards STARBOOKS being the first digitized S & T resources that can be used by SMNHS learners.
Source: https://www.facebook.com/SanMiguelNationalHighSchoolOfficial/posts/401758541970496