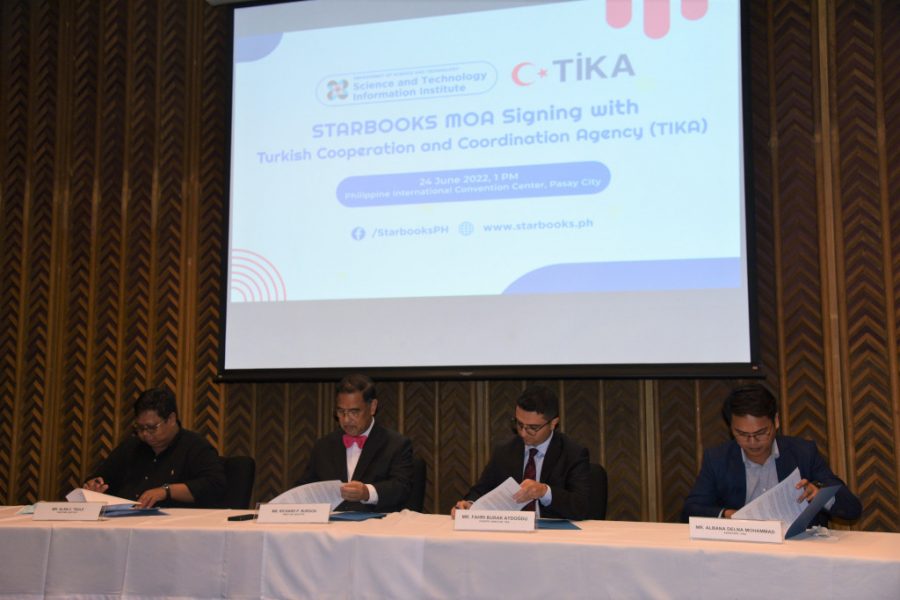 The signing ceremony held at Philippine International Convention Center on the occasion of the 11th anniversary of the Digital Library program called Starbooks was attended by Fortunato de la Pena, Secretary of Science and Technology of the Philippines; Richard Burgos, Director of Science and Technology Information Institute; and high-ranking representatives from several government departments.
At the signing ceremony and anniversary events, which attracted great media attention, Secretary de la Pena thanked the Turkish people for their generosity and interest and stated that they would continue to negotiate with TİKA to expand the cooperation.
Digital libraries, which gained great importance during the pandemic, offer equal access to online education and information sources and contain technical education materials both for primary and secondary education and for vocational training on various fields.
TİKA will install digital libraries in seven schools, including two of the schools it built in Bangsamoro Autonomous Region in Muslim Mindanao (BARMM), four schools in Palawan, and a village school in the rural area of Davao City, which has been affected by internal conflict.
The Starbooks Program was developed by Science and Technology Information Institute, affiliated with the Department of Science and Technology of the Philippines, in 2011 in order to digitize many printed, verbal, and visual resources in the local language and in English and make them accessible to users without the need for Internet access or electricity. Up to 20 users can access the solar-powered platform simultaneously. The program has been on the list of the priority national plans of the Government of the Philippines for 6 years and provides access to information in schools in the rural areas of the country, which consists of 7,000 islands.
Source: https://www.tika.gov.tr/en/news/tika_supports_digital_learning_in_the_philippines